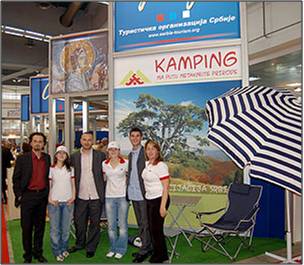 This project was implemented from February 2007 to January 2008 in Serbia and at tourism fairs in Berlin, Milan and Madrid.

Objectives of the action:

During this project Camping Association of Serbia participated, through cooperation with The Ministry of economy and regional Development – Sector for tourism and National Tourism Organization of Serbia, at the biggest tourism fairs in Europe (Berlin, Milan, Madrid) where camping offer in Serbia was presented for the first time (the first camping brochure in Serbia).